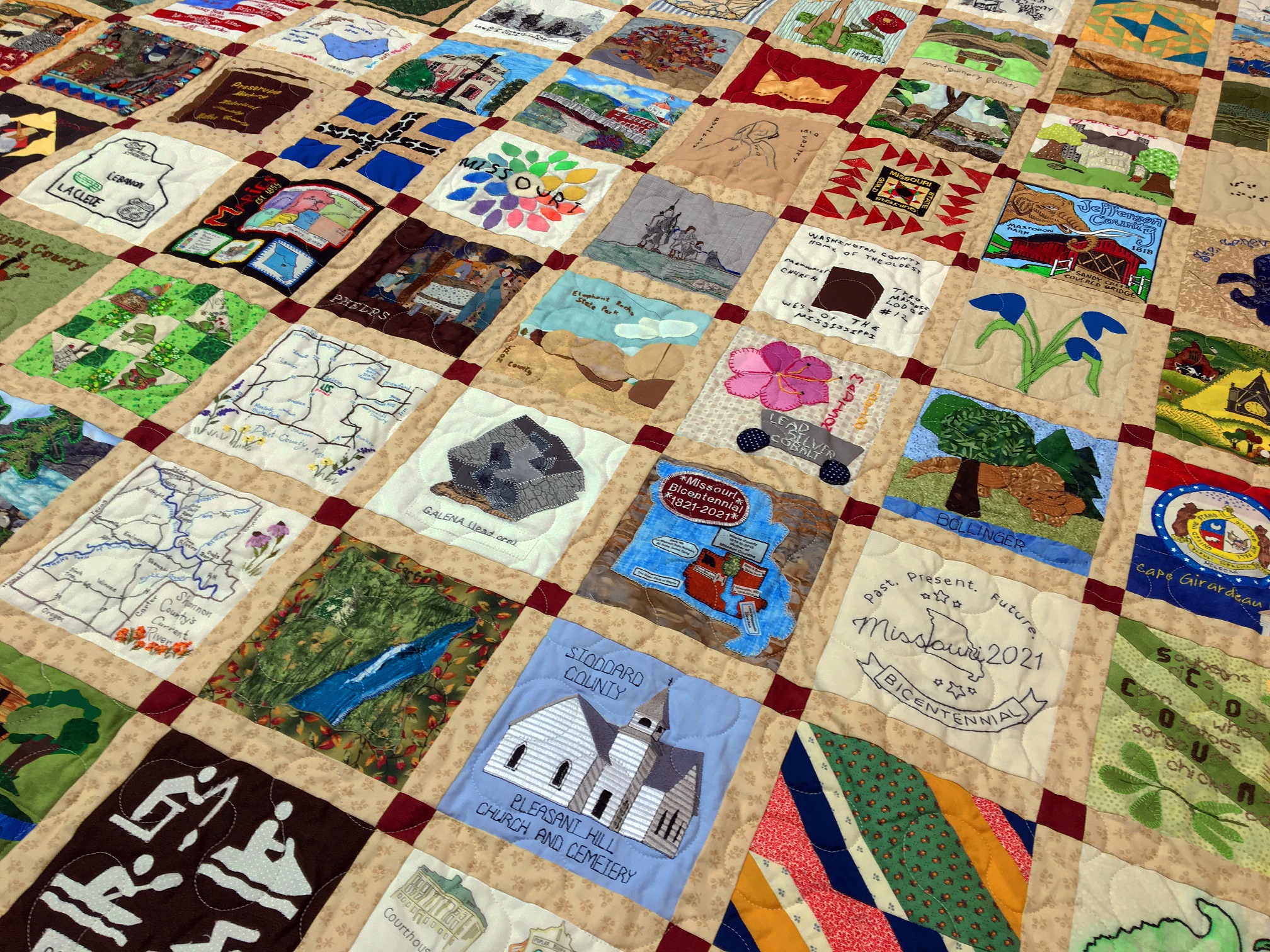 Notable Men and Women
of  Missouri

This exhibit was started in 2008 and was called Women of Missouri/Women of Power. In 2010 eighteen men were added to the exhibit and the title for the men was "Men of Integrity".  In 2011 we combined both exhibits into one category and called the exhibit Notable Men and Women of Missouri.  The quilt exhibit represents men and women in the fields of medicine, art, science, music, poetry, dance, sports, space, history, industry, fashion, education, movies and government.  All the individuals represented in these quilts were either born in Missouri or made their claim to fame in Missouri.

These quilts have been made by forty-one designers that were or are members of the Northland Quilt Guild and the Nitetime Needlers Quilt Guild.

On August 26, 2020, the nation marked the 100th anniversary of the certification of the 19th Amendment, which gave women the right to vote (called suffrage). In the Kansas City metro area, Shawnee Town 1929 Museum’s celebration included a replica of a women’s suffrage banner from 1919-1920 that suffragist Alice Paul sewed. The banner featured 36 stars representing the 36 states that ratified the 19th Amendment. The banner and stars were purple, yellow/gold, and white, the colors of the American Suffrage Movement.

The quilts were previously displayed as part of the Johnson County Museum Common Threads exhibit from November 2020 to February 2021, and were enjoyed by people waiting in line to vote in the November presidential election and also to get a COVID-19 vaccination.

Below you will find a small sampling of the quilts to be displayed at the 2021 Kansas City Regional Quilt Festival.

Grandma Got Me The Vote

Quilter: Pam Lanza, President, Starlight Quilters Guild 2021 My Suffrage quilt was "Grandma Got Me the Vote."

"What inspired me was my grandmother, Mary McCulley Petersen, who also inspired my love of quilting. She was raised on a farm in what is now Fort Leonard Wood, moved to Omaha around 1913 to go to secretarial school. She had a career.  I originally wanted to call the quilt "This is Personal" because it is a very personal history of a woman made of pioneer stock, fiercely independent who marched with the gold star for woman's suffrage."

"My block is based on the story of Harry T. Burn’s vote in the Tennessee General Assembly.  As the story goes, the assembly was evenly split with suffrage supporters wearing yellow roses and those against wearing red roses.  His mother, an educated woman, wrote him a letter which he had in his pocket urging him to vote for suffrage, which was not the view of the men in is district.  At the last moment, wearing a red rose, he voted to ratify the amendment making Tennessee the 36th and final state needed to amend the constitution.

The blocks I picked are Rosebuds,  Mother’s Choice and Tennessee .  The purple star is from the banner and was a required to be included in the quilt.

"The women in my family never talked about what they experienced in the early 1900s, so I missed my chance to find out how they felt.  I just wanted to keep it simple and appliqué the words. When I quilted it, I used words that I  learned about and thought were important as I watched and rewatched the PBS shows on the 19th amendment. They don’t show up very well, so IF I did it again, I would use thread that at least gave the words a chance to be seen."

9am-4pm
Become a sponsor, vendor or instructor for KCRQF 2021!