The 2023 Kansas City Regional Quilt Festival is honored to be showcasing the following Special Collections by two talented artists ~ Luke Haynes and Lea McComas.  The Festival will also have the privilege of showcasing a collection presented by the Triplett Sisters Block of the Month Participants - The Wedding Album Quilt.
These artists will have a sampling of their wonderful creations for our attendees to enjoy in the Quilt Exhibit Hall.  Don't miss them...you might see these talented quilters wandering around! 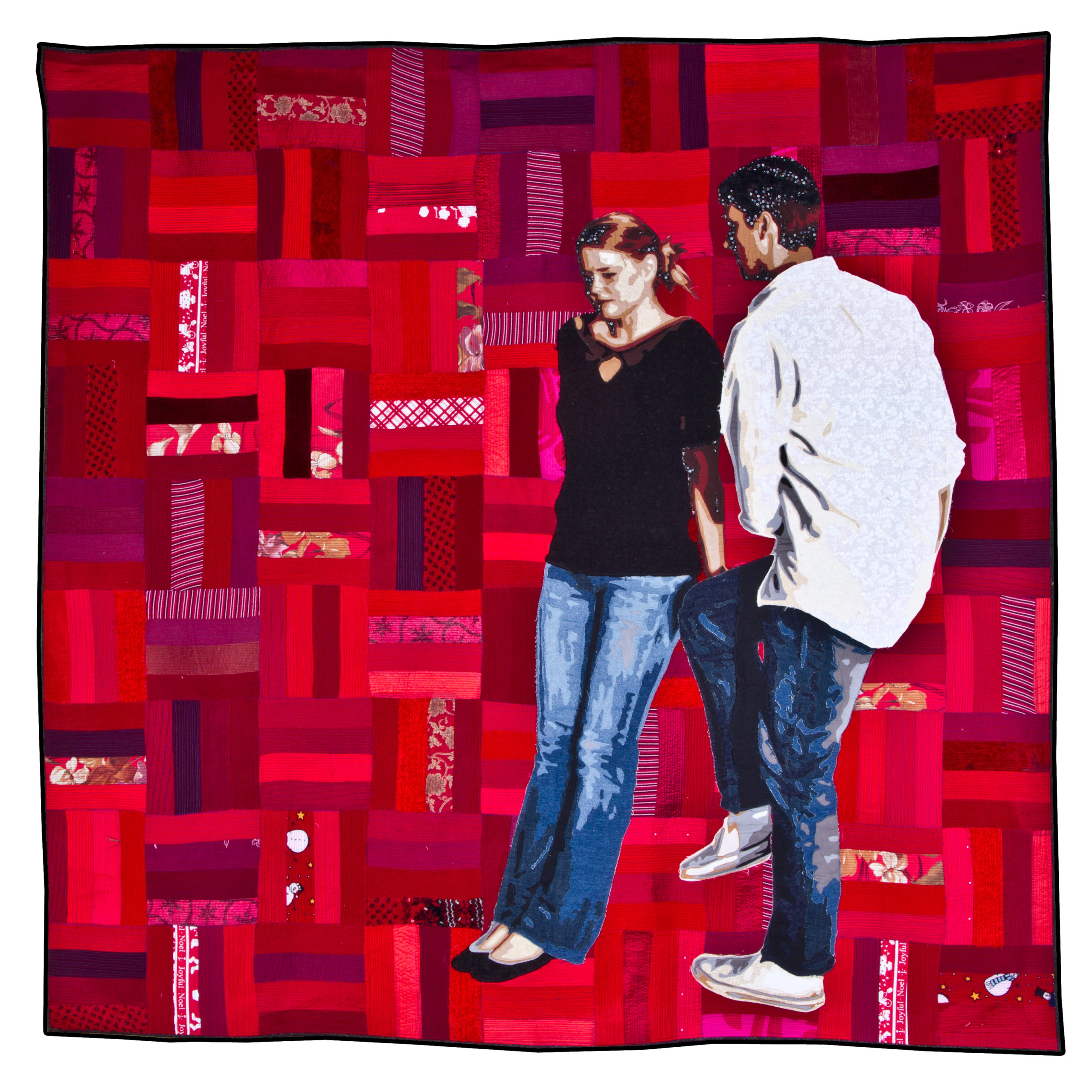 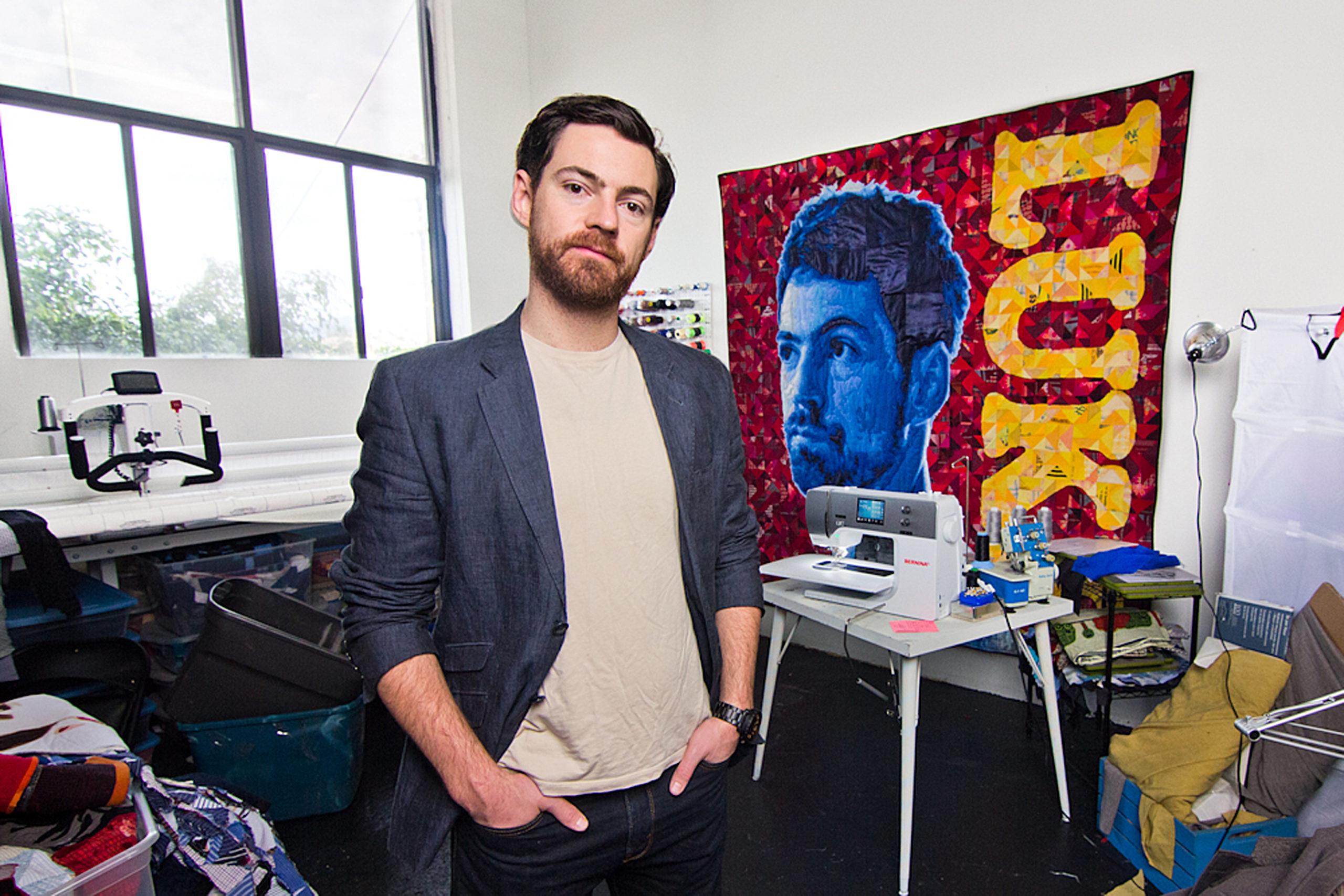 Subverting the traditional quilting form by integrating modern concepts, his art transforms the comfortably familiar into the visually evocative. Luke Haynes was born and raised across the American South. With a formal training in art and architecture at Cooper Union, New York, Haynes continues to experiment with quilting art while exploring art and architecture across the globe.

A chance encounter with a box of fabric remnants sparked Mr. Haynes' imagination. His first quilt, measuring 7′ x 10′, led him through years of experimentation and improvements over the years that he has been quilting.  Further honing his style, Mr. Haynes developed a system to piece manageable parts into a larger whole, applying a modern design sense to a familiar process. He uses reclaimed materials from the communities he works with in his projects to speak with the textile language of the area. 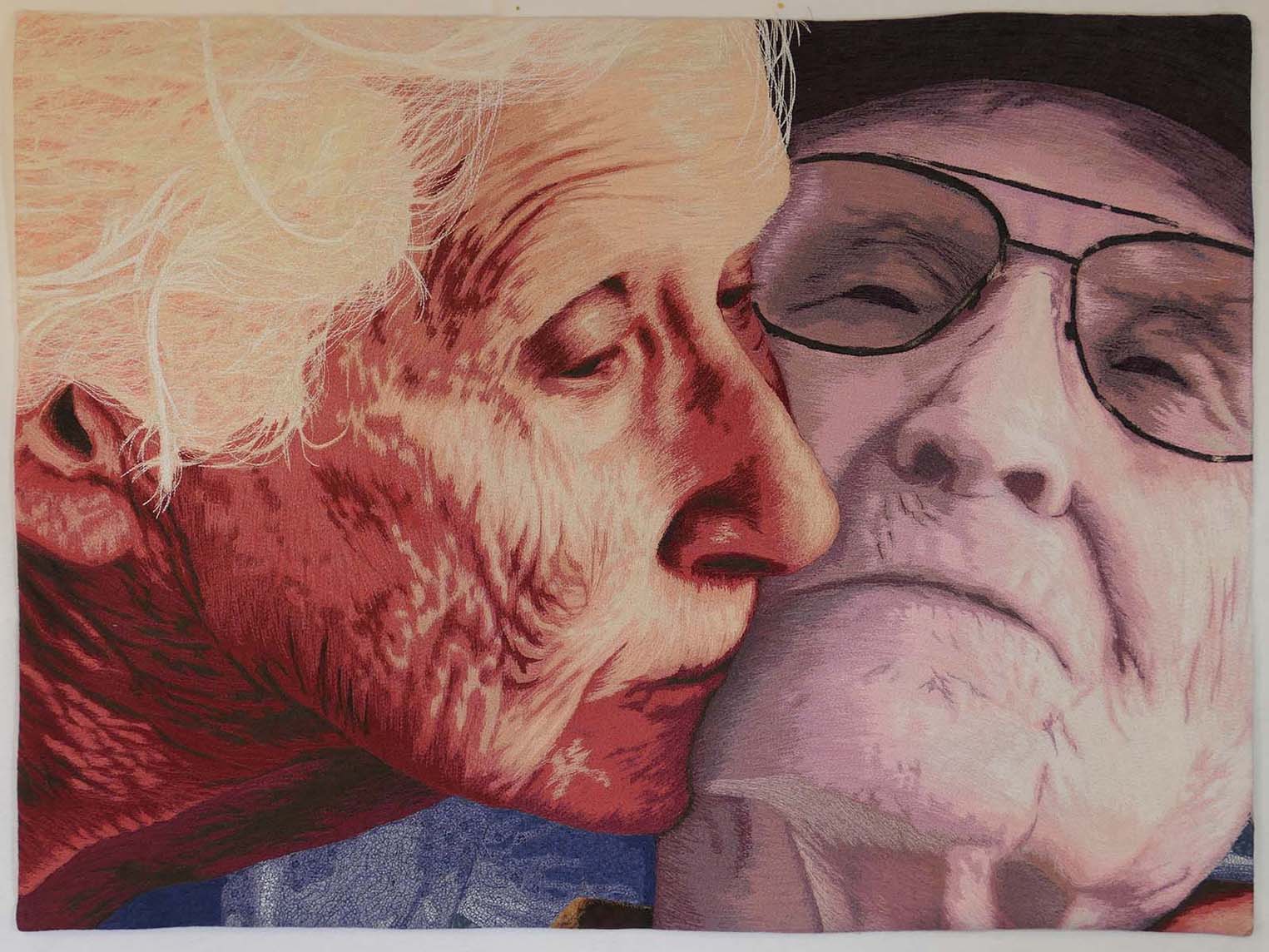 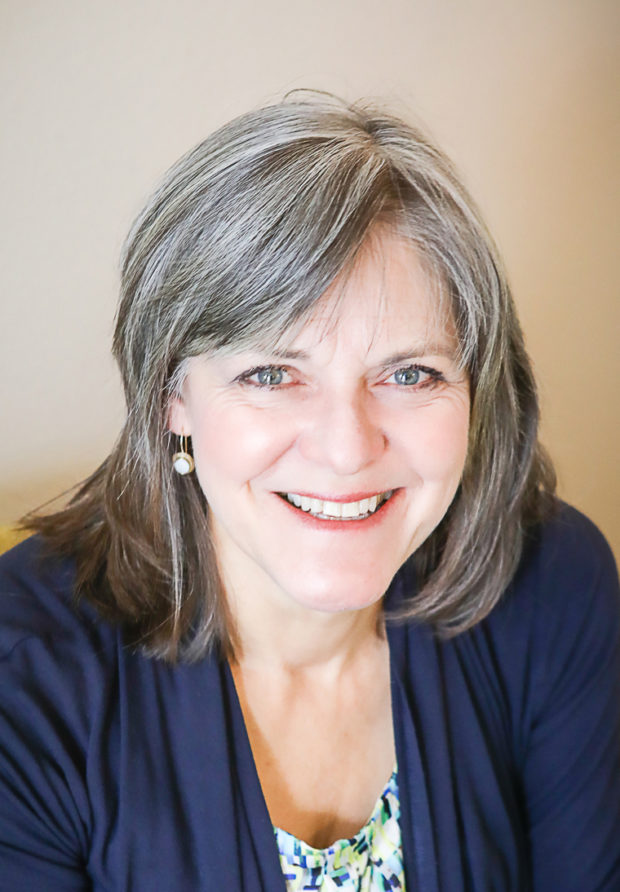 With a life-long interest in fiber, Lea McComas began sewing at age 6 and quilting at 16.  Her first original design, commemorating the 100 year anniversary of the Statue of Liberty, was selected to represent the state of Missouri in the First Great American Quilt Festival in 1986.

Lea earned an M.A. in Education, and has been a public school educator for almost 40 years, including 9 years spent serving military families stationed overseas.  While living abroad, Lea immersed herself in the local cultures, learning the arts and traditions of the people with whom she lived. This included studying carpet weaving in Turkey, and fabric dying in Japan.

Upon her return to the states in 2001, Lea discovered art quilting.  Simultaneously, she began a study of classic European art, and developed a keen interest in portrait and figurative works.  Her current techniques and compositions are a synthesis of these passions as she uses thread and fabric to create realistic pictorial works.

Lea’s award-winning portrait and genre quilts have been exhibited around the world, including Geneva, Vienna, Johannesburg,  and New York. She has been featured in numerous publications and online platforms such as Quilting Arts TV and magazine, and TheQuiltShow.com.  Lea shares the extensive knowledge and techniques behind her award-winning quilts in lectures, workshops, magazine articles, online courses at QuiltingDaily.com, and her book Thread Painted Portraits.  Learn more about Lea’s work at www.leamccomas.com 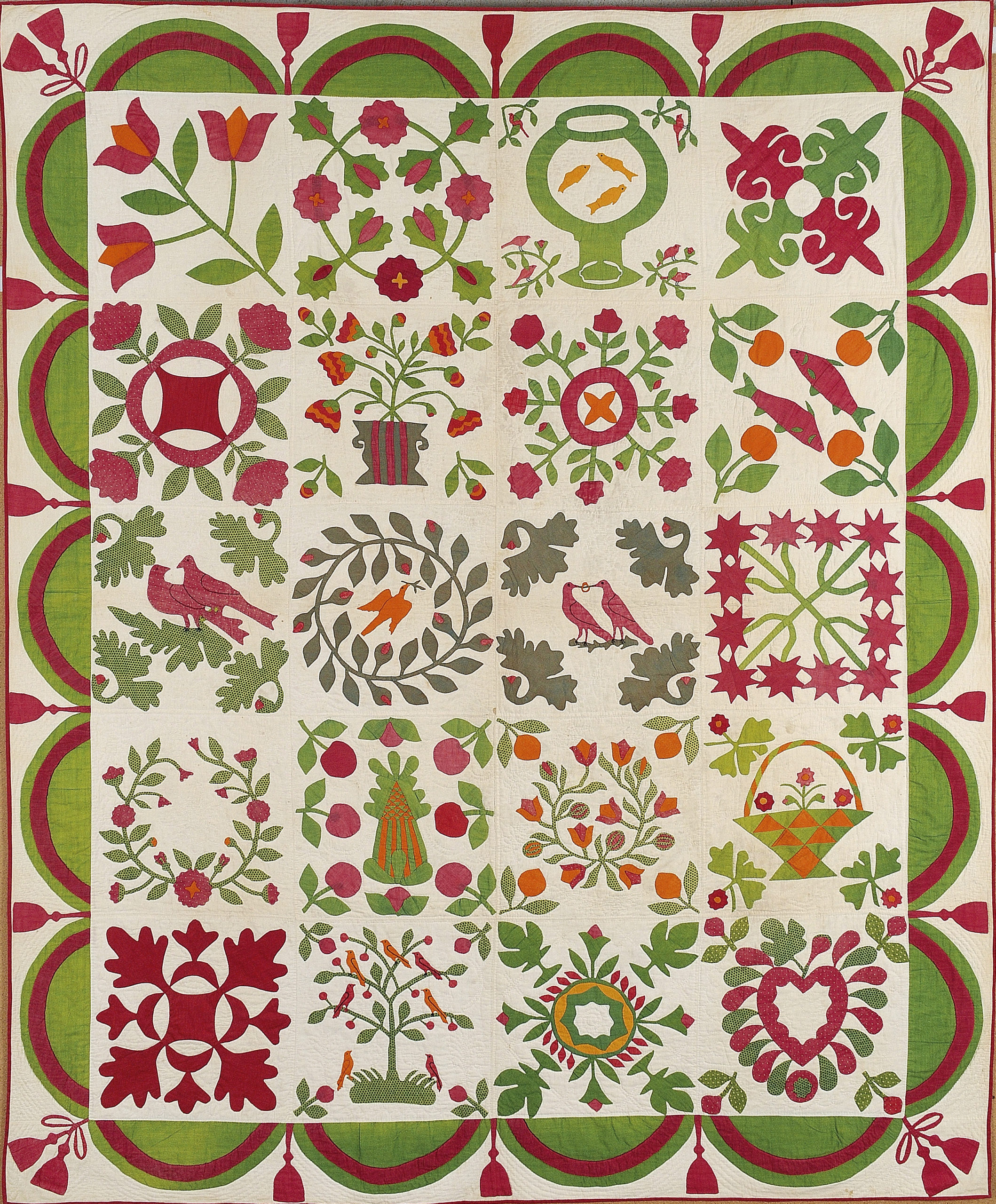 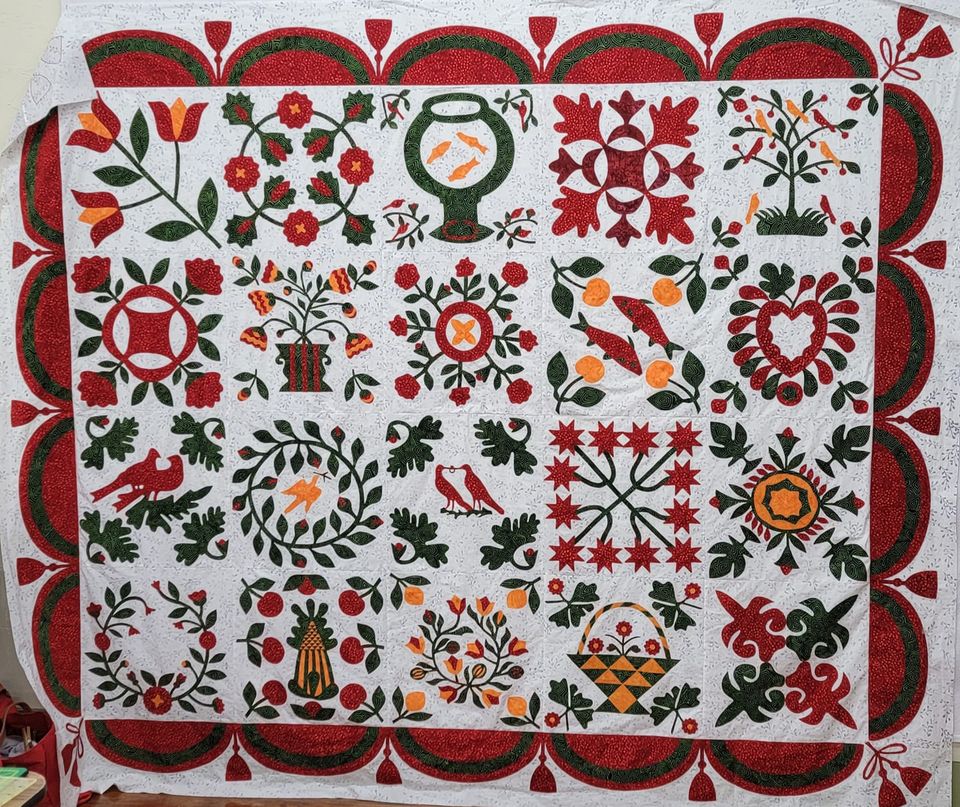 The Wedding Album Quilt was the 2020 Triplett Sisters Block of the Month, with more than 100 people from around the world participating in recreating their version of this c.1860 antique quilt. Unlike other BOMs, the Triplett Sisters encourage a variety of techniques, colors, and interpretation. Anyone is welcome to join in the making and this exhibit features quilt teachers, talented artists, and award winning quilters.

This approach makes for a unique exhibit all made with one pattern as you compare and contrast changes with the original quilt. Look through the quilts to see the variety of background fabrics used (not just off-white), different layouts, printed fabrics instead of solids (sometimes used by the original fabric designer), and hand painted fabrics. The applique techniques used vary from needle turn, back basting, fusible, applied treatments, and cut-out applique (sometimes known as broderie perse.) Decide what version and techniques you would choose as you create your version of this amazing and intriguing quilt.